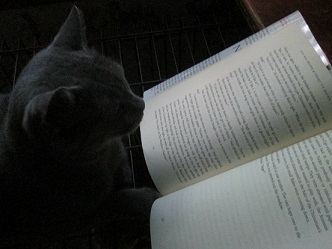 Gus, the author of most of our blog posts

Sister Mary Winifred was born and raised in Houston, Texas. For many years a Life Professed member of the Community of the Holy Spirit in New York, she later lived in the Community of the Ascension and as a solitary Religious at Ascension Hermitage and Sanctuary in Upper Fairmount, Maryland, in the Episcopal Diocese of Easton.

She is no longer a Religious Sister and has now resumed using her legal birth name, Emily Shepherd, but retains Sister Mary Winifred as a pen name. She has been a member of the Vergers Guild of the Episcopal Church since 2006, and is a Fellow of the Guild. She is a member of Christ Church Cathedral in Houston, and the Risley Family Association. She is the caretaker and writer-in-residence at Ascension Hermitage and Sanctuary and is the author of numerous articles and other works.

Following the Path of Life: Companions on the way
This is a book of inverse haiku - brief glimpses of the animals who live at Sanctuary House.
Handful of Stars
This little book includes poems for Advent, Christmas, and other liturgical seasons, as well as other topics: bagpipes; nature; letters to great friends and relatives; and of course, cats, dogs, and a horse.